"Traditional" in the context of these projects means pre-contact foods. No beef, mutton, goat, chicken, pork, milk, butter, cream, wheat flour (no fry bread), rye, barley, okra, black-eyed peas, or any other "Old World" food that many of us have lovingly incorporated into our diets and tribal cultures. No processed foods (Doritoes, Lays Chips, etc), even if the base is corn or potatoes. No chocolate unless it is unsweetened cacao or sweetened with honey from the Melipona bee, fruit, stevia, camas or agave. Be adventurous and try unfamiliar foods! There are many foods to choose from. My American Indian Health and Diet Project site lists and defines many of them. 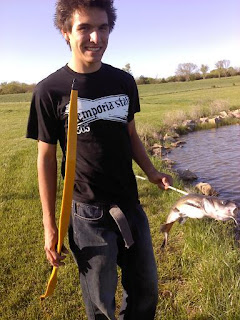 My son decided to catch some fish yesterday. Instead of using a pole, he got out an old bow and used an arrow with a tough string tied to the end. He shot several large catfish in our pond.
Speaking of staying active, I have to brag: Tosh won the Baldwin Invitational steeplechase last week. He broke the meet record by 7 seconds. He also won the 400m dash and his relay team won the 4x400. He has committed to Baker University to run cross country and track and plans to major in physical therapy and/or environmental issues.

Get Ready for the Second Annual Week of Indigenous Eating Challenge! November 2-9, 2012

Join the groups that have already voiced their support for the 2012 Challenge:

If your group is interested in offering moral support for this 2012 Challenge (you do not have to participate, just like the idea), let me know and I will add your name to the list.

November is Native American Heritage Month. During the first week, participants in this challenge will eat foods indigenous to this hemisphere. Eaters can focus on one tribe; or, because foods may be expensive, out of season, contaminated or not available, participants can choose to eat only one or two indigenous meals per day or, widen the meal possibilities by choosing any foods indigenous to the western hemisphere.

This site is maintained by Devon Mihesuah, the Cora Lee Beers Price Professor and Director of the American Indian Health and Diet Project (AIHD) at the University of Kansas. You will find many links here that connect to the AIHD site for recipes, lists of indigenous foods, resources for food research and gardening tips. Recipes are welcome. Send recipes and diet outlines to my e-mail: mihesuah@ku.edu 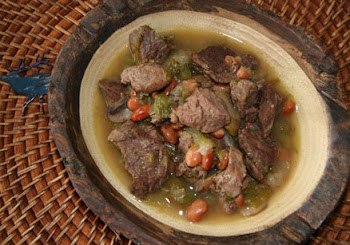 Recipes, including this one for elk stew (click picture) 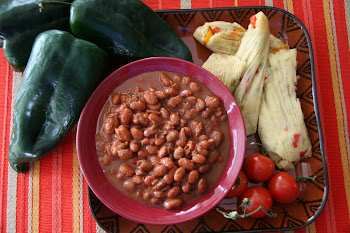 Vegetables, fruits and meats indigenous to this hemisphere (click picture)

Grow Your Own foods